SQL Server 2012 Analysis Services RC0 introduced a new SQL Server Profiler event class, DAX Query Plan, under the Query Processing event category. This is an advanced and rich new event class, but there has been no official document yet. Nonetheless, it has already attracted the attention of some users who are pushing us to release more information as soon as possible. While waiting for an official document to come out, I’ll try to find some spare time to temporarily fill the gap by providing some background information on this event class in a series of blog posts. As always, my goal is to provide accurate information with sufficient technical details. There are plenty of other BI professionals who are eager to help average users to learn this feature through intuitive, practical examples. I’ll be using the tabular model AdventureWorks for SQL Server 2012 RC0 when I need to demonstrate different aspects of DAX query plans through examples.

DAX Formula Engine evaluates a DAX expression in multiple stages and generates several tree data structures along the way, see Figure 1. The new trace event outputs two of the trees to help users investigate logic or performance issues. This is a great leap forward from the dark days of debugging MDX expressions. Logical plan trees show the primitive operations that make up the higher level user functions. The powerful yet sometimes mysterious automatic cross-table filtering becomes explicit in logical plan trees. Properties related to the sparsity of a scalar subtree tell you why DAX Formula Engine chooses one execution plan over another. If poor performance is caused by the Formula Engine, physical plan trees can help you locate the expensive sub-expressions that caused the problem.

Format of the Query Plans

Let’s first study the general structure and format common to both types of plan trees. Send the following DAX query to the tabular AdventureWorks database:

Number of Trace Events per Query 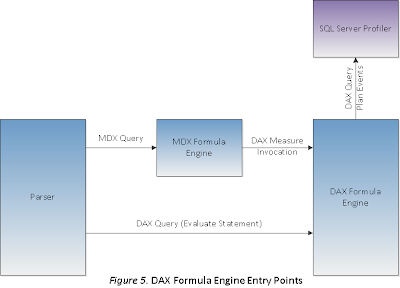 Ideally, the DAX Formula Engine should generate both the logical plan and the physical plan before any query execution happens so users can capture the plans without being blocked by potentially long-running operations. But this is not the case in the current implementation. Logical plans are built in two stages. The first stage is quick and light-weight, but the second stage may need to execute a portion of the tree therefore potentially expensive. Unfortunately the logical plan event is fired after the second stage is completed, so sometimes users may have to wait for certain time-consuming operations to finish before they can capture the logical plan event. But in most cases, constructing and simplifying a logical plan is a quick process. On the other hand, building a physical plan can often involve expensive operations. Although currently the trace event only shows two types of physical plan nodes: lookup and iterator, there is actually a third type of plan node: spool. A spool plan is when an operator materializes its result in memory by executing its entire subtree. A physical plan tree may contain many nodes built from spools, each of which requires partial execution of a subtree before the entire physical plan tree is fully constructed. In particular, all leaf level nodes which require fetching data from the VertiPaq Engine currently always build spools to store VertiPaq results, therefore, users can see the physical plan event only after all VertiPaq queries have completed. 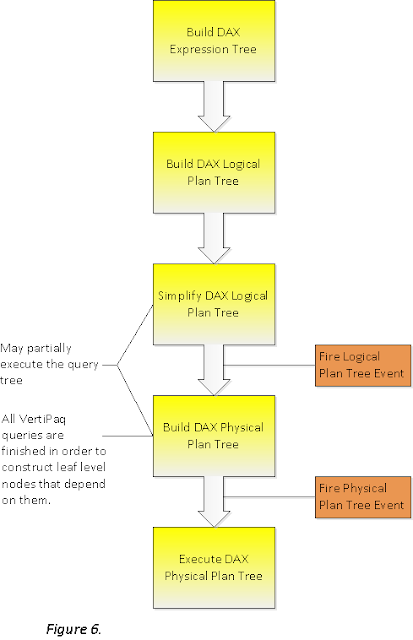 The new DAX Query Plan trace event can assist you in writing efficient DAX expressions and troubleshooting problematic DAX behavior. How you use them is up to you, but first you need to understand the information contained within the plans and how to interpret it. Today we have gone over the basics such as types of plans, format of text, types of plan nodes, and when and how frequently the events are fired. Next time we are going one step further to examine the various properties of plan nodes.
Posted by Jeffrey Wang at 10:22 PM 5 comments: